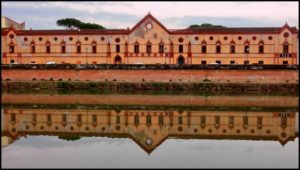 The Monastery of S. Benedetto in Pisa originally arose in the early twelfth century on the Pisan coast as a hermit community. Due to the raids of Saracen pirates, the nuns abandoned the place of their first settlement to take refuge in the city, near the church of S. Paolo a Ripa d’Arno, held at the time by Benedictine monks.
The construction of the new monastery dates back to 1393. The complex – church and convent – was built on the southern bank of the Arno. The structure underwent massive renovations during the sixteenth century, following the passage of the nuns to the Order of St. Stephen (1565), and again in the seventeenth with the creation of the old facade and of the quadrangul  ar bell tower.

In 1808, with the Napoleonic occupation, the monastery was requisitioned and the religious forced to move. In 1814, to return to their possession, they accepted the condition imposed on them by Ferdinand of Lorraine and renewed it at their own expense. Subsequently, in 1850, a new facade was built along the course of the Arno by the architect Domenico Santini, who conceived the division into three dark red kiosks. The use of flamboyant Gothic windows was a novelty for Pisan architectural customs. 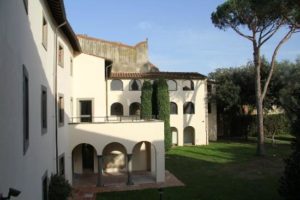 On 31 August 1943 the building was bombed by the Allied forces, and at the end of the war the nuns, attempting to reconstruct the building, asked for a few years’ leave from the enclosure to be itinerant. After a few years, however, they were forced to think about selling the property because of structural problems. In the 60s they began contacts with the Benedictine Monastery in Empoli, for the merger of the two cenobos and the construction of the Monastery in Pontasserchio (near Pisa), where the Religious life began again on November 13, 1969.

The Benedictine complex in Lungarno, closed to the cult, was later bought and restored by the University of Pisa, which used it as a guesthouse for Italian and foreign students and professors and as a 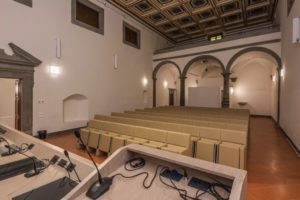 venue for conferences. The “Le Benedettine” Center is located in a very suggestive context, it overlooks the Arno river, has an internal garden and includes three rooms located on the first floor. The Auditorium (room A) has a capacity of 95 seats and is located in the church of the old convent; The room is set up for filming and video conferencing. Rooms B and C have, respectively, 77 and 40 seats and are equipped with a video projection system.